Servair, French market leader and the fourth largest company worldwide in airline catering and logistics, is continuing its collaboration with Guy Martin, which started in 2002. The Michelin-starred chef, a founding member of the Servair Culinary Studio, has thus been tasked with creating six meals for the new Air France Business menu and training the Servair teams.

Guy Martin creates six meals for the Air France Business menu
For a period of six months, starting from October 1st, 2013, Servair will be offering Air France Business Class passengers the chance to enjoy one of six recipes specially created by Guy Martin on board its long-haul flights from Paris. A different dish will be offered every fortnight to ensure that frequent travelers are constantly delighted.
This approach forms part of the collaboration initiated by Servair with the finest chefs, a key element of the company's culinary strategy. Big names in the cheffing world, such as Joël Robuchon, Régis Marcon, Michel Roth, François Adamski, Yves Camdeborde and Anne-Sophie Pic, have distinguished themselves as ambassadors of French gastronomy by proposing Signature Meals for the Air France Business class menu.

Guy Martin trains the Servair chefs in making his Signature Meals
In six Servair centers in the Paris area, chefs were appointed to manage the cooking and presentation of each of these Signature Meals. They will ensure that the meals are correctly prepared by their teams. Guy Martin trained them for two days so that in turn they can convey to passengers all the pleasure that the Michelin-starred Chef of the Grand Véfour restaurant has put into his creations. 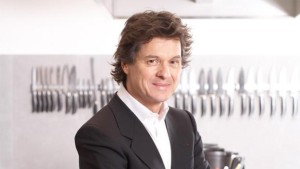 A founding member of the Servair Culinary Studio, since 2002, Guy Martin has regularly endorsed meals for Air France's First and Business classes. A Michelin-starred Chef, he assumed management of the kitchens at the Grand Véfour restaurant in 1991 of which he became the owner in 2011. Two other Paris addresses have welcomed his talents: the Cristal Room Baccarat and Le 68 within the Guerlain boutique on the Champs Elysées.

In 2014, he opened his first restaurant within The Brando, a hotel in Tetiaora, French Polynesia, ranked 20th among the 100 most beautiful hotels in the world. In 2015, he opened the "I Love Paris" restaurant and champagne bar at Paris CDG airport, voted as best airport restaurant in 2016.

Guy Martin has been named as Best Chef of the Year by the Pudlowski and Gault-Millau guides, Chef of the 21st Century in Japan, best "Chef of French Cuisine" and ranked among the seven top world chefs by The World Masters of Culinary Arts. He is also an Officer of the National Order of the Legion of Honour.

As a member of the Culinary Academy and Honorary Professor of the Tokyo French Food Culinary Center, he is working to improve French gastronomy, inspired by flavours from abroad. The Head Chef has also published many cookery books, regularly collaborating with the nutritionist Michel Chast and hosts the television programme Epicerie Fine on TV5 Monde.